For more than fifty years, Brown Industries has been partnering with its clients to aid them in bringing their products to the market. Brown specializes in designing and manufacturing in-store fixtures and signage that helps their clients generate more sales. They provide those displays and graphics to a number of major retailers including home improvement stores, sporting goods outlets, and flooring companies.

With nearly one million square feet of manufacturing and warehousing space, Brown offers their design and manufacturing expertise in large format printing, offset and digital printing, and wood and metal fabrication. Additionally, they maintain the data systems used to inventory, consolidate, and route their customers’ campaigns into the field across the nation. Two years ago, Brown began building a spreadsheet in order to handle simple pricing estimates for their printing division. The spreadsheet was designed for quick and consistent pricing for basic printing needs. While their print management software is robust – capable of handling projects of practically any scale – it also requires a great deal of specialized training and a considerable amount of effort and time in order to produce individual estimates: the spreadsheet addressed and resolved these issues because they could customize it to suit their unique needs.

The ability to produce on-the-fly estimates made the spreadsheet a powerful tool in the hands of their inside sales and sales departments; rather than waiting for their requests to be processed by an estimating department, they were able to access the information that they required just as soon as they required it. However, several security concerns still remained – preventing them from releasing the spreadsheet to all parties that required it. They simply couldn’t risk their estimating formulas and pricing standards falling into the hands of their competition, which becomes a greater possibility the more frequently that spreadsheets are duplicated and transferred openly.

At this point, Brown decided to investigate what it would take to get the spreadsheet converted into an application. They spoke with several software companies and received very steep estimates for the production of a software tool built from their spreadsheet. In addition, any updates to the software would come with extra fees. They began searching for alternative solutions and they stumbled across SpreadsheetWEB. After an initial demo with the Pagos team, they were convinced that SpreadsheetWEB was the right technology for the project. 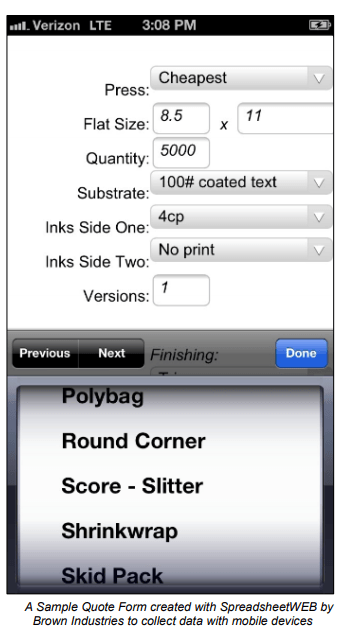 Their Excel workbook was easily published as a web application through SpreadsheetWEB. They purchased a cloud license to simplify any additional application maintenance – and the whole system was up and running in a matter of days.

“SpreadsheetWEB solved a number of issues for us. We could maintain the security of our pricing structure. We could give our sales reps access to an instant estimating tool while in the field. They can create a custom quote in seconds, right in front of the customer, on their iPhone or laptop, and have a quote letter automatically created and forwarded to their inbox. We could lower the workload on our estimating department. We could make changes to our calculations on the fly, without involving an expensive programmer. Via SpreadsheetWEB reporting functions we could track what pricing was being created with our estimating tool, which was obviously not a possibility with a spreadsheet. These things give us a distinct advantage over our competition”

“We’ve worked on creating SpreadsheetWEB estimating applications for the sampling and display divisions of our company as well. Multi-divisional quotes typically take two to three days to complete in our industry, if not longer. We’re looking at using SpreadsheetWEB to build custom estimating systems that could take care of those quotes in minutes or hours instead of days.” 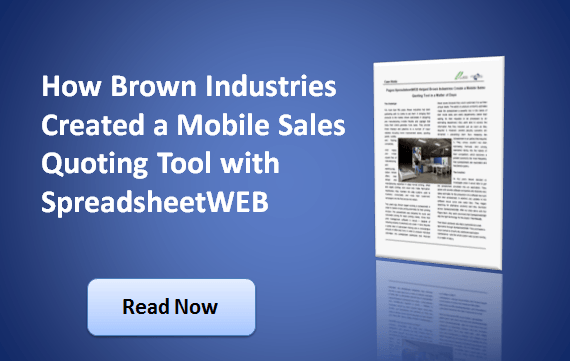