Group Benefit Services (GBS) is one of the largest employee benefit plan administrators in the Mid-Atlantic. Since 1980, they’ve been working with clients of all sizes, offering their expertise in custom tailored, cost effective benefit programs. Focusing on local businesses, GBS thought that it was time to expand their custom programs to reach other parts of the country. However, their rating model was an Excel spreadsheet. Passing this workbook around the country was not an option as this would jeopardize data integrity and security.

On top of everything, the rating tool uses rates that need to be updated periodically. It would be very cumbersome to ensure that all underwriters have the latest version of the spreadsheet.

“We have a very easy to use front end. We want to control where users need to enter data, validate their inputs, and make sure that everything is entered correctly. We don’t want to worry about taking care of all the little issues.”

GBS already had the rating tool in an Excel format. With SpreadsheetWEB’s calculation engine, no additional programming was necessary to transfer that logic to the web. This meant a huge savings on development time and costs. GBS users are familiar with their web interface and they employ developers and use tools to maintain it. The ability to integrate the calculators with their front end was one of the major selling points for GBS. SpreadsheetWEB’s flexibility with integration into other systems through API calls, made it a strong candidate for this project. This gave GBS full control over the user interface, and also means that this system can be complemented by other business software (such as CRM programs) to form a full automation loop. GBS purchased a SpreadsheetWEB dedicated cloud license, which essentially provides them with a hassle-free, private server environment and all updates of the software. The server and all its tasks are maintained by Pagos.

SpreadsheetWEB’s calculation engine was integrated into the front end GBS had developed. All that needed to be done was pushing their Excel model into their server, and hooking up the engine with the rest of the system.

“We have our own front end where users come in and put in the information that we send to SpreadsheetWEB through JSON. The user can then generate a custom PDF and get a print out.”

The business model works seamlessly with the front end GBS created. Using SpreadsheetWEB as a web service, GBS was able to scale up their operations.

“It allows us to spread out from our geographical boundaries to a national scale. Our tool is now utilized by more than 130
users. We are very pleased with the support Pagos provides us. There were a lot of changes that needed to be made on our end and their end, but Pagos was very quick to help us develop this tool.” 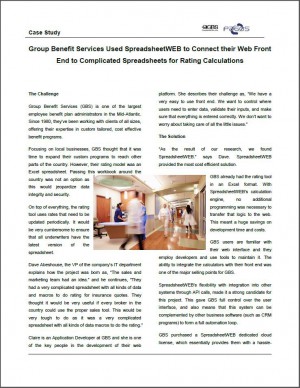